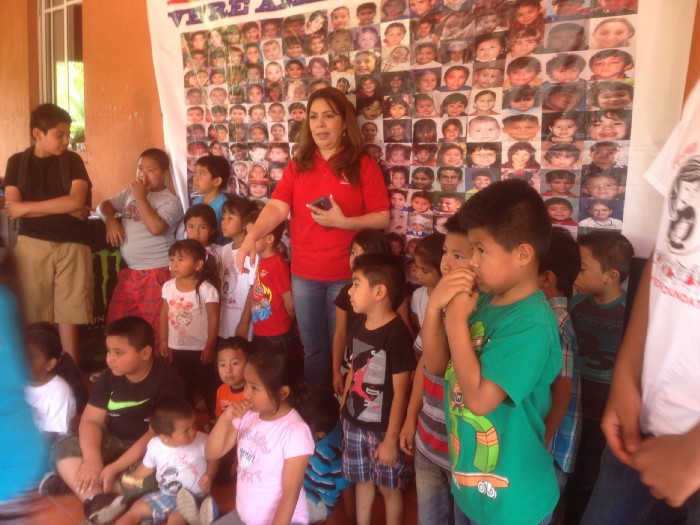 HOMESTEAD, Florida. — Attending a Saturday get-together at Children Foundation founder Nora Sandigo’s home is to take the collective pulse of the immigrant children of Greater Miami. The children are diverse, of mixed status, and fear the deportation of their parents and the aftermath.

“It has been 30 years now, and I never set out to do any of this, it just happened. The first one to arrive at my door was Cecia Soza, she told me how to become her legal guardian to prevent her deportation along with her undocumented parents, and now it is like angels arriving in my yard, and they keep coming,” Sandigo said.

With over 1,100 guardianships already signed, Sandigo sees no letup. The Migration Policy Institute (MPI) reports that during the past decade, the U.S. government deported 3.7 million undocumented immigrants and MPI also estimated that parents of American-born children who unlike their parents cannot be deported, made up between one-fifth and one-quarter of this total.

U.S. Rep. Luis Gutierrez said, “it could be as many as 6 million children” who will lose their parents U.S. born or not if President Trump makes good on his promise to deport 11 million undocumented immigrants. According to one report because of their large numbers, Latino children are a unique case that constitutes a hidden world.

Several events have combined to create the perfect storm putting children’s lives and America’s future at risk. MPI cites a spike in immigration not seen since the 1970s which had created a more diverse population. The election of Donald Trump and the actions of his administration in its first 100 days, has polarization nativists from an increasingly diverse society.

President Donald Trump’s government has reacted to this change in the national mood by criminalizing immigration by executive decree, striking fear at the heart of immigrant communities while threatening to tear it’s families apart. Research indicates a global trend where children suffer the most trauma, and increasingly these children from diverse backgrounds represent the future of America.

A new study suggests that turning the undocumented into recipients of Deferred Action for Childhood Arrivals or “DACAmented” children can have a positive impact on their health and welfare. The authors realize that by addressing the spiritual, emotional, physical, intellectual and legal protection of children orphaned by deportations, they are impacting the future of the nation.

Another of MPI’s reports stated that the social system is not set up to cope with this level of trauma citing mental health, economic hardship, housing instability, instability in caregiving, performance in school and returning to the parent’s home country as adversely affecting these children. To this list could be added locating parents in detention, visiting parents in custody, access to health care, transportation and access to services.

Ritibih Kumar is Sandigo’s adopted American-born son and his parents were deported to India. Kumar attended the Saturday get together and said, “There used to be over three hundred at these gatherings, but they are afraid to come out in public for fear of an Immigration and Customs Enforcement raid (ICE).”

Kumar spoke with greater confidence at the Miami-Dade commissioner’s special meeting on Sanctuary City status. As Kumar covers his face he says he prefers to be known as “K” now; a clear demonstration of the emotional strain, stigma, and withdrawal the Trump administration’s criminalization of immigration is having on young people over time.

“It is important to gain their trust, after all, handing over legal control over their children is a big thing, and many have a justifiable fear of authority,” Sandigo said. Kumar leads the group in a prayer to help guide the Congress.

“It is best to start out as a friend to these people by helping out,” said Sandigo. She fumbles on her computer to locate a photo of a woman at last week’s get together and as she scrolls down to the bottom of the image the ICE leg bracelet monitoring her whereabouts is visible.” They follow you everywhere,” Sandigo said.

It does not take much under Trump’s executive order; a second traffic violation, a faked driver’s license, and it lands you in police custody, and then ICE can take you and your children. “They come to your home, your church, the hospital or school,” said Sandigo.

The Harvard Immigration and Refugee Program (HIRC) recognizes “Crimigration” as a new and emergent field of the law that deals with “this critical intersection between society and the law” which it says “focuses on the immigration consequences of criminal convictions.”

Stephen Yale-Loehr is a professor of immigration law practice at Cornell Law School, who explained in a recently published article that “because immigration courts consider civil, not criminal proceedings, regular due process protections do not apply in the same way.” Undocumented immigrants who wind up in removal proceedings are not entitled to a court-appointed attorney, the standard rules of evidence do not apply, and hearsay can come in,” Yale-Loehr said.

The Washington Post reported that ICE detainers have doubled since Trump took office, and there is a growing resistance to these arbitrary policies from a more diverse society. Broward school board held a special meeting and voted not to cooperate with ICE and the Superintendent of Miami-Dade Public Schools, Alberto Carvalho once also undocumented himself has agreed to do the same.

Dr. Margarita Rodriguez’s study of American Fraternity which supports the efforts of Children Foundation as a model of civic engagement discusses how a small-scale, nonpartisan activist groups can form and have a large impact on immigration policies that directly address the suffering of that community. The study concluded that voluntary associations have a central role in supporting legislative agendas in America.

The Department of Homeland Security’s news release June 16, 2017, already shows that the Trump administration is backing down from its hardline stance on immigration due to public pressure. It stated that it would honor the 2012 Obama DACA relief program.

In a video, U.S. Rep. Gutierrez reassures a crowd that executive orders on immigration have historical precedent and validity. An MPI study revealed that almost all undocumented immigrants could be assisted by using legal avenues available to them and by the expansion of existing programs like DACA, as well as the proposed Deferred Action for Parents of Americans and Lawful Permanent Residents (DAPA).

Other programs exist such as NACARA to address political asylum seekers and refugees by country and region. President Trump canceled the Development, Relief, and Education for Alien Minors Act (DREAM) which would have established a multiphase support system for DACA recipients while a study demonstrated how the passage of the Dream Act would positively impact the economy.

Sandigo launched a Supreme Court case that claims that these citizen children are denied their right to petition the government which the U.S. Constitution guarantees. Sandigo also mentioned discussions with lawmakers in March 2016 and an Amicus brief prepared by a nationwide coalition of agencies concerned with the welfare of children.

The brief identified key areas where the law had failed to protect constitutional obligations. Principal among them unaddressed humanitarian concerns when it enjoined DAPA as well as the public interest in enhancing educational opportunities before enjoining DACA. Sandigo’s court case brought against the government by Children Foundation is still mired in a jurisdictional battle and is about to enter into the California judicial system where they hope to build legal precedent state by state.

U.S. Representative Lincoln Balart was a part of the Pedro Pan (Peter Pan) airlift of 14,000 children from Cuba in the 1960s and the author of the DAPA bill that would have amended DACA allowing parents to stay with their children but it stalled in the courts. Ceci Soza said “coming from my circumstances I would never have gotten to Georgetown Law School without the encouragement and involvement in my life of Nora Sandigo.”

The Miami Herald maintains a networked database of Pedro Pan survivors. Because of the secrecy needed to protect children, they have not been in contact for decades. “What is most remarkable about these people is how accomplished they are, what amazing lives they have had and things they have contributed to American society,” said Sandigo.

The Honorable Josephina Carbonell is a Pedro-Pan child was also the Assistant Secretary for Aging in the federal government. Carbonell has moved through the immigrant life cycle and recognizes that there is a tremendous unfilled need for volunteerism.

Dr. Eduardo Padron is another prominent Pedro Pan child and the president of Miami-Dade College who knows the problems of students living in poverty firsthand as only a third of MDC students ever graduate. Sandigo has 300 college students who are activists in training from MDC and Florida International University students who help out at gatherings, and some will be accompanying her to Washington to do marketing June 23.

Sandigo’s husband Raymundo Otero said that Latinos have no sense of permanency or planning and that may be a part of the problem. “A Costa Rican will tell you that you have to learn from their example,” Otero said, but Sandigo objected and preferred her approach which she believes is more natural. “Yes, and now Costa Rica has a lot of problems, and it is not the pristine nature preserve it once was,” Sandigo said.

It is important to recognize that these are the poorest 10 percent from the poorest countries in Latin America and the victims of economic mismanagement in their countries who also represent a “poor tax” on wealthier countries like the U.S. They also represent younger demographics according to a New York Times article.

The 14th Amendment is being giving a broad interpretation that allows U.S. born children of the undocumented to stay in the absence of a more coherent immigration plan. But does it contribute to an unnatural separation from their parents who may be deported and leave them behind hoping they will have a chance at a better life?

Miami’s overwhelmingly immigrant and majority Cuban exile community’s collective memory is burdened by the plight of its children. It needs to remember, but at the same time, it wants to forget. The Pedro Pan and Children Foundation operations were born out of fear, uncertainty and a natural instinct to protect children that won’t let them forget.

Sandigo is on the phone again and with nervous excitement announces that the Directors of Operation Pedro Pan have arranged for the acquisition of a parcel of land to build a new support center for the growing number of new arrivals. With a blend of mystery and secrecy prevalent in Miami’s Cuban exile, population few other details are available.