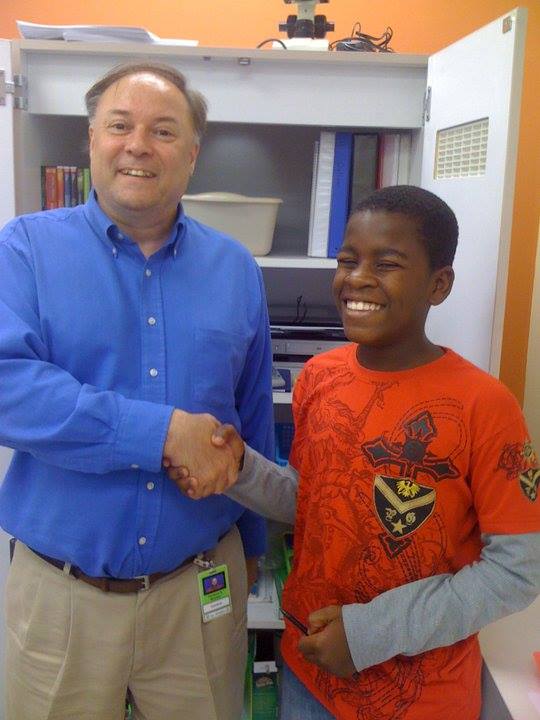 Damon Weaver Just Wants To Be Respected for What He Accomplishes

Damon Weaver at the age of ten was the youngest person in history to interview a sitting president. Weaver is back in the news again, after a seven-year hiatus from the limelight, and marking a return to journalism which is his first love.

He is 18 now and the recipient of a full-ride Presidential Scholarship to Albany State University in his native Georgia. Teacher Brian Zimmerman was the first to identify Damon’s unique voice casting him as a member of the KCE TV news team in 2008 at Katheryn E. Cunningham/Canal Point Elementary School in Pahokee, Florida. Zimmerman is a speech-language pathologist and a 17-year teaching veteran. He has spent many of those years at Canal Point and he has formed a life-long bond with Weaver.

Weaver went on to interview more than a hundred celebrities from the worlds of politics, sports, and entertainment. Zimmerman said, “at one time I was acting as his agent.” To many Americans, Joe Biden, Caroline Kennedy, Oprah Winfrey, Larry King, Duane Wade, and Samuel L. Jackson are household names, but for Weaver, none could compare to his lifelong dream of interviewing Barack Obama.

But there is much more to Damon’s story than building a brand. The key interview that opened the door to all the rest, took nearly a year of their lives to materialize, and almost didn’t happen twice. Zimmerman said, “it was luck, and Damon being in the right place at the right time,” dogged persistence, and “…above all getting Barack Obama elected president,” that set events in motion. Zimmerman and Weaver were granted press credentials for a Democratic Party election campaign event at the Palm Beach Convention Centre. Joe Biden agreed to be interviewed. Biden placed his hand on Weaver’s shoulder as the interview began. That interview went viral on the internet. Regina Weaver is Damon’s mother. She said, “my son was very determined, and we made two trips to Washington D.C.”

Years ago in another interview, Weaver said, that like Shirley Temple “he didn’t have a normal childhood because he was around adults all the time.” Weaver has a way of drawing you into the dialog that is his unfolding world.Weaver’s first question is, “Do you believe in God?”

This reveals that he wasn’t always the assertive child we saw on the TV medium that he commands so masterfully. Combing through old interviews, at 10 Weaver said, “I want to be a pilot, and president and a journalist and a football player.” On another occasion, a little older and wiser, he had decided to go into the army and the field of logistics. Mrs. Weaver believes that her son is a realist because he knows that God already knows what is going to happen even before we know and that meeting the president was a humbling experience for him. “My son wants to be respected for who he is and his accomplishments,” she said.

Weaver found academics difficult. Zimmerman said, “I got him into BAK Middle School and Dreyfoos High School.” These are the two best schools for the Arts in Palm Beach county. “He floundered there, and in senior year wisely chose to attend a regular high school, played some football, and managed to pull his socks up in time to go to college,” he said.

Zimmerman said, “in Pahokee, for many years Damon was the only bright spot on the news.” Hearing the latest news about Weaver seemed to buoy the local population. They cheered him on. Now Damon feels that he owes it to his hometown to succeed and to help them with their struggle.”

Zimmerman said, “most people here are caught in the welfare trap.” Regina Weaver is a single mother with five children and is no exception to that rule.

Zimmerman said, “she has a job as a 911 operator but lives in subsidized housing. So Damon does get to see someone who goes to work at a 9 to 5 job.” Pahokee, Florida, is an agricultural town with a big heart in central Florida that has sent more than 60 players to the NFL. It’s the only way out for this mostly Black town of about 6,000.

Weaver co-produced a prime-time TV segment with ABC’s Diane Sawyer titled: “If I Only Had a Gun,” about his hometown’s problems. Zimmerman said, “in Pahokee, everyone seems to be related to someone else.” It’s like a large family. The town, however, is also quite literally ringed with prisons. These form a major part of the state’s prison archipelago; a constant reminder of the “New Jim Crow” in America. Pahokee which is littered with gangs and weapons is the first stop for many when they are released from those jails. After hours it is no place for children.

When Damon interviewed President Obama, he grilled him on the question of violence.

Scene: At the White House in the Diplomatic Room

DAMON WEAVER: “I notice, as president, you get bullied a lot. How do you handle it?”

BARACK OBAMA: “As president, I get what?”

DAMON WEAVER: “Were you ever bullied in school?”

President Obama was taken aback by the remark but Weaver persisted. President Obama said no. There was foreshadowing mixed with a chilling echo in Weaver’s questions as we exit two presidential terms marked by racially motivated crime directed particularly against young black men often targeted by law enforcement. As well as gang and mass shootings that frequently target equally defenseless children. It is reminiscent of the raging battles of the civil rights struggles of the 1960s but with a new twist.

The Superbowl is on Sunday. This is the Atlanta Falcon’s first Superbowl and he is confident they will go all the way. NPR reports that the Neilson ratings for the big game are down to 43 points. Damon admits that it could be because of all the attention that politics is getting.

He said, “we have to impeach Trump.”

Weaver’s dream is to work for CNN one day as a sportscaster. Even though he is a master of the TV interview, the medium of a previous generation.

Weaver said, “it is all connected via the screen.”

The trick is to cultivate a following and keep their attention. To quote Carlos Santana when he wanted to return to music, “To connect the molecules to the light.”

Weaver instructs as he speaks. On his Facebook page yesterday, he sees in the comments “you are a showoff.”

Weaver said, “Today I discovered that I have enemies.”