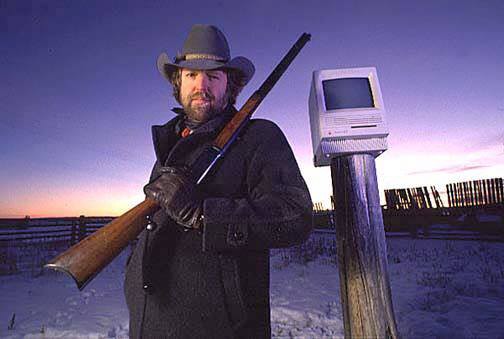 John Perry Barlow was a former cattle rancher, lyricist, and digital rights activist. Barlow died peacefully in his sleep at the age of 70 on the morning of Feb. 7, 2018, in San Francisco. Barlow had been in declining health due to complications arising from heart surgery several years earlier.

Barlow’s enduring legacy lies in how he tied the 1960s counterculture to the internet by popularizing the term cyber libertarianism and the dictum that: “Information wants to be free.” Barlow’s unique genius, however, is best explained by understanding his changing concept of the American frontier.

Barlow was born in Sublette County, Wyoming, to Norman Barlow, a Republican state representative, and his wife, Miriam. Barlow grew up on the closing American frontier on the historic 22,000-acre Bar Cross Ranch, founded by his Mormon grandfather P.W. Jenkins.

Barlow spent 17 years as a cattle rancher on the Bar Cross raising his family there before selling it. Family ranching was dying out and with it, the old frontier identity, and they were perpetually in debt after generations of family debts due to illnesses. During this time he was Dick Cheney’s Western Wyoming campaign manager. Barlow credited Cheney with sparking his first environmental awareness. Cheney was the last New Deal candidate and as such the environmental candidate defending ranchers’ rights against encroaching developers.

Guitarist Bob Weir was Barlow’s writing partner on such Dead standards as “Estimated Prophet” and “Cassidy” a song about Beat writer Jack Kerouac friend Neil Cassidy the manic bus driver of Merry Prankster Ken Kesey’s bus “Furthur.” Kesey participated in government-sponsored LSD experiments while attending Stanford University. He and the Pranksters organized the “Acid Tests” where the Grateful Dead got their start. Tom Wolfe immortalized the tests in his seminal work in the then-novel genre of “New Journalism” “The Electric Kool-Aid Acid Test.”

Disgraced Harvard psychology professor Dr.Timothy Leary conducted similar experiments culminating in his pronouncement that an entire generation should: “Turn on, tune in and drop out.” A turn of phrase that is often erroneously attributed to Marshall McLuhan. Barlow graduating from Wesleyan University with high honors in Religious Studies and admitted to Harvard Law School traveled to India instead and later became a Leary confidante. Barlow was then a bona fide member of the east and west coast radical scenes but discovered that they never agreed on anything except LSD. True to form Barlow was taking LSD daily in the last few weeks of his life in an effort to “slip the surly bonds of earth.”

Weir and Barlow met at the Fountain School in Wyoming; a school for children with behavioral difficulties. Weir tweeted the following statement about his boyhood friend:

“This life is fleeting, as we all know — the Muse we serve is not. John had a way of taking life’s most difficult things and framing them as challenges, therefore adventures — by their nature awakening and maybe even fun. He was to be admired for that, even emulated. He’ll live on in the songs we wrote.”

While Barlow could never have bargained for it, by the end of that career, he would discover a new “electronic” frontier at the turn of the 21st Century-Cyberspace. Barlow said that “The Dead” promoted viral marketing by allowing concertgoers to tape and distribute their work. The facilitation of this practice was also instrumental in the development of the first online community “The Well.” One day the FBI came knocking on the door of a 17-year-old doing precisely that, and Barlow decided to rally to his defense. Barlow and Lotus Software creator Mitch Kapor founded the Electronic Frontier Foundation to protect people’s digital rights.

Barlow became a fellow of the Berkman-Klein Center for Internet and Society at the Harvard Law School. The Electronic Frontier Foundation (EFF) director and longtime Barlow associate Cindy Cohn tweeted “It is no exaggeration to say that major parts of the internet we all know and love today exist and thrive because of Barlow’s vision and leadership. He always saw the internet as a fundamental place of freedom, where voices long silenced can find an audience and people can connect with others regardless of physical distance.” Like a frontier.

Barlow had earned the nickname “The Thomas Jefferson of Cyberspace” after inking a manifesto “A Declaration of the Independence of Cyberspace.” In it, Barlow recognized that the same libertarian values that limit government guiding our revolutionary forefathers form the basis of the quest for a free society and an open internet.

According to the Webster’s dictionary, the term “a cyberlibertarian” refers to someone that “views the internet or cyberspace as a means of attaining individual existence without central governments.” Unlike the closing dual frontiers of both time and space in the west influenced by laws or philosophy respectively, Barlow insisted that as Cyberlibertarians there had to be room for involvement free of either as constraints for everyone simultaneously; “Everyone talking to everyone everywhere at the same time”-a state we have yet to reach.

But the electronic frontier filled up fast. Critics such as Media Ecologist Dr. Eric McLuhan have suggested that as President Donald Trump is learning, perhaps the hard way, representative government is irrelevant in a discarnate virtual presence -in cyberspace, there is no “body” to govern.

Barlow’s and his friend Daniel Ellsberg co-founded the Freedom of the Press Foundation. In the 20th century era of print, Ellsberg a whistleblower who leaked the Pentagon Papers to the newspapers about government cover-ups during the Vietnam War was a hero, but on the electronic frontier, like Barlow, whistleblowers and leakers wear the black cowboy hats.

Harvard Extension School instructor Allan A.Ryan teaches a Constitution and the Media course and is also quick to point out that on the internet it is hard to tell who is wearing which hat. For example, when Julian Assange, the WikiLeaks’s website’s founder publishes documents that he believes should be made freely available, it makes him a source, not a journalist. Hundreds of years ago the First Amendment protected our rights online to all be considered as journalists. Now as prosumers we are more like editors than journalists.

Today, Assange deemed an outlaw, lives under house arrest in a protected embassy in London. National Security Agency (NSA) whistleblower Ed Snowden lives in exile in Russia. Leaker Chelsea Manning is a convicted spy, and wrongfully convicted internet activist Aaron Swartz who was profoundly influenced by Barlow, after committing suicide became a martyr to the cause of digital rights activism. The counter-culture has all but been forgotten.

The first internet-inspired uprising the “Arab Spring” was quelched and is but a memory now. Russian hackers nipping at the heels of American democracy may have unduly influenced the outcome of the recent presidential elections in Donald Trump’s favor.

Cohn tweeted; “Barlow knew that new technology could create and empower evil as much as it could create and empower good. He made a conscious decision to focus on the latter: “I knew it’s also true that a good way to invent the future is to predict it. So I predicted Utopia, hoping to give Liberty a running start before the laws of Moore and Metcalfe delivered up what Ed Snowden now correctly calls “turn-key totalitarianism.” Moore and Metcalfe’s laws predict a faster and cheaper internet with more rapid rates of technological improvement.”

In a deathbed confession to the author six months before passing on, Barlow said he had abandoned his earlier ideas. He believed he had become in his phrase “a good ancestor” that his work was done. Weir said; “he had lost his sense of adventure” and finally Barlow confided in the author that he had tremendous faith that next generations would take up the mantle.

In his declaration, Barlow laid the blame for the current battle for good over evil on the internet squarely at the feet of Silicon Valley software developers who assume that their products are good in and of themselves, as well as its executive class’ embrace of antiquated neoliberal ideology. Silicon Valley insiders claim that today’s most successful internet CEOs micro-dose with LSD.

Surviving Barlow is a newborn granddaughter Willah, his three daughters, Amelia, Leah, Anna, and ex-wife Elaine. Barlow the Cyberlibertarian prophet may be dead but he is still relevant, and the outcome of the battle for the future of the internet that Barlow envisioned remains uncertain.

Note: If you found Barlow an interesting profile and want to explore the significance of his life a bit more here are some good starting points:

The Internet and the World Wide Web are often seen as part of a new “electronic frontier,” with profound implications for the future of communications, society, and the economy. The slogan “the Internet is free” echoes the “free land” mantra of the Turner thesis. Indeed, opposition to paywalls and subscription services resembles the pioneer quest for free land unencumbered by ownership claims. Scholars analyzing the Internet have often cited Frederick Jackson Turner’s frontier model. Of special concern is the question of whether the electronic frontier will replicate the stages of development of the American land frontier. Wikipedia is a major presence on the electronic frontier, and the Wikipedia editors have been explicitly compared to the pioneers of Turner’s American frontier in terms of their youth, aggressiveness, boldness, equalitarianism, and rejection of limitations.

Albion’s Seed: Four British Folkways in America is a 1989 book by David Hackett Fischer that details the folkways of four groups of people who moved from distinct regions of Great Britain (Albion) to the United States. The argument is that the culture of each of the groups persisted, to provide the basis for the modern United States.[1] Fischer explains “the origins and stability of a social system which for two centuries has remained stubbornly democratic in its politics, capitalist in its economy, libertarian in its laws and individualist in its society and pluralistic in its culture.”[2] Fischer describes Albion’s Seed as a modified Teutonic germ theory within the framework of the Frontier Thesis and the migration model.

Barlow is sometimes also referred to as a “Zelig like”. chameleon character.