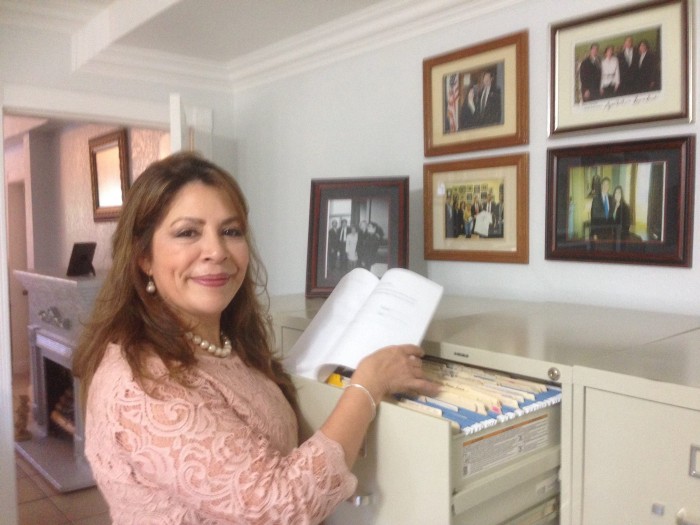 MIAMI Nora Sandigo, brought three small children orphaned by the deportation of their parents to the Miami-Dade County Commissioner’s special meeting to testify on the impact President Trump’s Sanctuary City declaration will have on other children like them. Sporting a colorful Children Foundation T-shirt one child said, “Do you even know if I have a roof over my head?” Another said, “Who is going to make me breakfast?”

These are the children of deported undocumented immigrant parents who are U.S. citizens by birth. There are an estimated 3–5 million children in similar situations in this country.

immigrants convicted of minor infractions of the law are being handed over to Immigration and Customs Enforcement (ICE) officials and deported. Many will never see their children again and they will wind up in the foster care system.

After their testimony the assembled crowd in the packed city chambers of this tightly-knit immigrant community that has been stricken with fear by the order gave her a standing ovation. As she turned to leave, Miami-Dade Mayor Jose Gimenez reached over the guardrail and kissed her on the cheek. “Thanks, Nora,” he said. Then reporters engulfed her and the children.

Meet Nora Sandigo, an American institution. She is a beautiful, and charming but down to earth woman who greets you at the door of her home. In a television interview, U.S Rep. Ileana Ros-Lehtinen said, “Sandigo is a force of nature and a force to be reckoned with.”

Trump’s declaration has sharpened the debate over the fate of these children but Sindigo cared when no one else did. Sandigo became the legal guardian responsible for the health, education and welfare of 1,000 of these children.

Attorney Dan Schlemmer who represented Sindigo in a failed Supreme Court challenge to the deportations 10 years ago said, “Now they represent an entire class of people.” Miami Attorney Alfonso Oviedo will be handling the appeal of the case of Nora Sindigo versus the State of Florida in the Southern Florida Fifth Circuit District Court in Miami next month. The lawsuit claims that as a class they were denied legal recourse when the court bounced all class actions to the Supreme Court and that court rejected the case.

Sandigo prepared a statement for a news conference on the court case: “One of my greatest dreams is to see that every child is happy in a home and with the love and care of their fathers and mothers.” Beauty is the promise of happiness, someone once said.

Sandigo recalled her happy childhood in Comalapa, Nicaragua. Everything was peaceful, and she remembers a river where you could fish. Her parents were prosperous farmers, and they fed many people in the town at their table, like one family.

Sandigo arrived in San Diego, California 30 years ago in the back of a paneled truck as a refugee from Nicaragua during the Sandinista’s murderous campaign. Soon afterward she made her way to Miami.

“I don’t want to give you the wrong impression, we are not wealthy by any means and we work hard. I am the Children Foundation; I do this all myself.

We have several businesses and that is how we pay for most of it, we depend on charity too. We operate a tree nursery, an insurance company and an assisted-living facility,” she said.

“They are not listening to us,” she said. She believes if this keeps up she will have to build an orphanage.

Sandigo glanced at one of the several cell phones ringing on her desk. The calls came in from all over the country; that one is a call from a family in New Jersey.

The children are calling for “The Great Mother,” but she resisted being mythologized. She said, “They call me a lot of things. I have a lot of names.”

Sandigo’s office looked more like a living room with pictures of her daughters on a shelf. But if you were expecting to see an orphanage full of children in her care you would be disappointed. There isn’t a sign of the children anywhere, no voices, not a single photo as if they have disappeared without a trace.

Sandigo motioned to another room. Inside lies the answer to a secret and a state within a state in a long bank of file cabinets. As she opened a file to show how she is documenting each child with great care and in whose care each one has been placed, she said, “Here they are, the children.

There are photographs of the politicians she has worked with that continue to support her legal efforts on top of the cabinets. “I continue to work very closely with Hillary Clinton,” she said.

“I have made a lot of friends,” she said. She remembered Senator Edward Kennedy with fondness whom she said was so supportive throughout the years, especially in getting the Development, Relief and Education for Alien Minors Act (DREAM) relaunched which would have provided a path to citizenship for children brought here by their parents. After the DREAM Act failed, the Deferred Action for Childhood Arrivals Act (DACA) under Obama succeeded.

Sandigo’s adoptive daughter Cecia Soza is a perfect example of how DACA and DREAM could impact these children when they are a little older. Soza’s parents were deported back to their native Nicaragua when she was in her middle teen years.

Soza attends Georgetown University’s law school. Because she wasn’t born in the U.S., she was eligible for and received a Fulbright Scholarship.

Soza said, “I don’t know how much you know about DACA.” Under DACA Soza could never work for the government because she isn’t eligible for citizenship and is not entitled to government student loans.

Soza admires President Obama. She praises Obama as the first president to represent people in her situation.

“I talk to my mother in Nicaragua every day, and I have ever since they were forced to leave. My father didn’t have a driver’s license because he was undocumented and because it was an infraction of the law they deported him. I will never forget the day ICE came to our home and took him away,” said Soza.

A second news conference was held in the office of U.S. Rep. Gutierrez. He has been called many names too; “the Moses of Latinos,the little fighting rooster, or el gallito and compared to Martin Luther King.

“We may not win this case but it is important that we have our day in court so the voices of these children are heard,” said Schlemmer. Gutierrez said it is a shame that the Children Foundation is doing the labor the government should be doing.

Gutierrez alluded to the history of this immigration crisis which dates back to Los Braceros; the mass importation of agricultural workers during WWII when the immigration system first became broken and groups of people of mixed-status started to emerge. That system is desperately in need of reform.