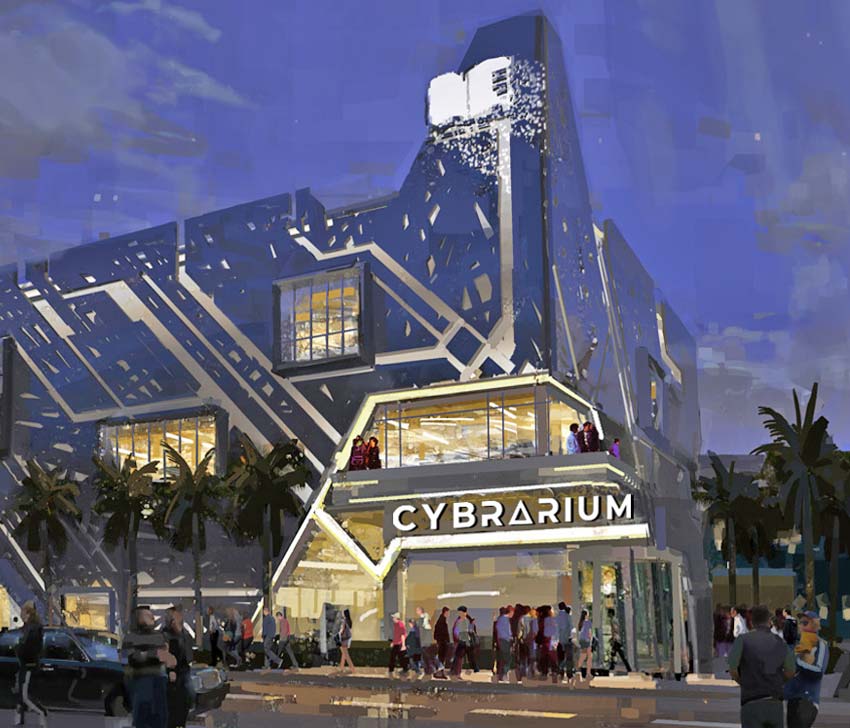 Inside one of the hundreds of small start-up businesses, that are tucked away, amid the Miami Wynwood art district’s brightly painted warehouses or nearby, workers are designing applications for technology that may contain the seeds of a new global-growth high-tech business. With it may come the the promise of a local boom in high-tech jobs for developers.

Each year the gritty Wynwood neighborhood also plays host to Art Basel and the world’s wealthy elite who arrive to shop in one of the world’s highest priced art fairs. But this conceptual art district has also become home to an entrepreneurial high-tech boom where art, technology, and media are merging. Today, Miami is serving as a model of how a local culture, creativity, and design contribute to a regional economy’s success story.

Many of these stories are tied to Miami’s immigrant entrepreneurs. Miami has yet to produce a Fortune 500 company, but this might only be a matter of time as like-minded tech investors willing to take the big risks such as Amazon.com’s founder Jeff Bezos, who is also a Cuban immigrant, was reportedly seen at one of Manny Medina’s eMerge high-tech venture capital meet-ups. Many experts agree that if one or two of these companies grows into a Fortune 500 company success story it would cement Miami’s status as a regional tech-hub and investment would follow.

The New American Enterprise Institute and The Partnership for a New American Economy reports that 42 percent of American Fortune 500 companies are started by immigrants and their children. Manny Medina is also a Cuban immigrant success story. His start-up which developed telecommunication infrastructure for Columbia was sold to Verizon Corporation for a billion dollars. The Kaufman Institute reported in 2016 that Miami is the number one city for high-tech startups and at 37.4 percent has the highest rates of foreign born high-tech entrepreneurs. The report also notes that 80 percent of Miami’s population is foreign born or are second-generation immigrants. In Florida, and in business, the immigrant imbalance is equally pronounced: 29.7 percent are immigrants, and 36.7 percent founded new businesses in 2006–2010, representing a 13.3 percent annual immigrant business growth rate.

The LabMiami business incubator is home to Wyncode a computer coding school founded by Juha and Johanna Mikkola, an immigrant couple from highly educated Finland via Canada. MIT graduate Eduardo Toro is a second-generation immigrant and a Wyncode trainer who is giving back to his community. Together they are filling the growing gap for programmers while helping their students develop the needed personal skills to make them more marketable. Sharing the Wynwood-Art Basel buzz, the affable Mr. Toro remarked that, “at Art Basel this week the hottest show will be a virtual-reality demonstration by a start-up that developed virtual walk-throughs of art galleries.”

Down the road at the Pipeline workspace, Avenue Planet is preparing that virtual-reality presentation for tomorrow’s opening. Kabir Frutos is North American director of the company and he would like it to be a Fortune 500 company one day. They chose Miami because of the language, and the culture, and because it is the next tech-hub. Their other office is in Barcelona.“We definitely do use Wyncode coders,” Mr. Frutos says. He can foresee a time as Miami grows as a tech-hub when finding and sourcing talent locally could be as big a problem as attracting capital is today.

Avenue Planet’s web-site explains that it’s virtual-reality enabled shopping platform features the world’s best shopping streets and that it is a new ecosystem that will be used by many to access great content and live unimaginable experiences. Art Basel with its global reach is the perfect showcase for this virtual-reality content producer and the nearly limitless possibilities for developers that it represents. Seven of its eight-member executive board are natives of Portugal, Spain, and England. What ties them together is that they are all highly educated, and global media experts.

Located on the outskirts of Miami in sleepy Dania Beach, Magic Leap is touted as the future of VR technology. Industry insiders believe this ultra-secretive company’s mixed-reality chip might one day replace Apple, Microsoft, computing and smartphones. Magic Leap recently received the largest third-round financing in history: 750 million dollars from the Chinese internet giant Ali Baba. Including investments from Jeff Bezos, Google, and Qualcomm, this raises their current capitalization to 4.5 billion dollars.

Wyncoder computer trainer Ed Toro believes that Magic Leap needs the anonymity of Dania Beach as much as Miami needs them. He believes that they would never survive in the ultra-competitive Silicon Valley culture; where people move from one company to another, taking valuable secrets in this field with them. They are opening a manufacturing plant and plan to stay. Miami is still wide-open.

Wired magazine co-founder Kevin Kelly who got a sneak-peek at the hottest ticket in tech is a convert to MR. He believes that as the virtual society grows, it will feed on its own success and that Magic Leap and other VR companies will replace existing companies and become even bigger.

Magic Leap’s founder Rony Abovitz is a Florida native and a second-generation immigrant whose parents emigrated from Israel. Rony Abovitz holds a master’s degree in Bio-Medical Engineering from the University of Miami. It is an inter-disciplinary, science, technology, engineering, and mathematics, program or STEM for short. His first company MAKO’s implementation of the mixed-reality chip which resembles a lens in eyeglasses assisted surgeons with robotic knee surgeries. It recently changed hands for 1.1 billion dollars.

Magic Leap partner WETA whose Peter Jackson developed the “Lord of the Rings” trilogy believes that it could be used for education, entertainment, and travel. In a virtual society companies such as Wyncode, Avenue Planet, and Open English, could partner with technology companies like Giant Leap to develop content and leverage global growth opportunities.

Glancing at the hundreds of available jobs for developers on a print out from the Magic Leap careers web page, Toro goes down the list nodding and with a can-do spirit adds: “Yes we can fill that job, and that one…and that one.” In two days Toro and Wyncode will be hosting a Magic Leap developer as one of their judges at Wyncode’s end of course student awards competition.

The biggest prize of all would be a job offer from Magic Leap but so far they have hired one Wyncode coder. Instead of hiring mostly locally, they have partnered with a supplier in Japan called CATO. They are attracting a lot of talent from California too. It is ironic that because of their deep pockets and global strategies, and unlike its founder Abovitz and light-field technology itself, it isn’t realistic to think that most of the developers are going to come from Florida Universities or Wyncode for that matter.

Miami is also known as a “City of Exiles” for its Cuban cold-war era refugees that dominate the city’s politics. Miami’s art is a unique inspiration of it’s immigrant identity too. The American Museum of the Cuban Diaspora opened to the public for the first time to coincide with Miami Arts Week and Art Basel. With customary Cuban hospitality over cups of Cuban coffee a museum spokesperson explained that for twenty-years it was a museum without walls while struggling to get the museum funded and finished through bad economic times before gaining a permanent status and home. “Latin Americans favor expressionism in their art,” she said. Mrs. Illeana Fuentes the curator held a press conference and told the media that the museum is about accomplishment, victory and survival.” A lot like the high-tech entrepreneurship the Wynwood district typifies. But mixed-reality as an art form is still ten years away.

Dr. Eduardo Padron is the President of Miami Dade College, the largest educational institution in the country with 160,000 students. A distinguished American educator, there could be no better example of the success of Cuba’s early migrations which prioritized family, community values, and education over the state and communist ideology.

Dr. Padron is the embodiment of inclusion; so Miami-Dade is never far from it’s immigrant roots and deeply democratic. Miami-Dade College tuition is very inexpensive and helps the children of immigrants climb the steep ladder of success, one step at a time. But the climb is steep and hard for many at MDC and sister school Florida International University. Each has notoriously low completion rates: 32 percent and 52.9 percent respectively in 2014.

To discuss viable solutions for America’s skills and education gap in STEM fields Dr. Padron’s expertise was called upon at the U.S. News STEM Solutions National Leadership Conference. According to US News “This is a mission-critical event focused on the shortage of STEM skills in the American workforce.” The report states that, “it brings the issue onto the national stage and assembles major corporations, leading educators, top policymakers and education technology companies in order to create the collective impact needed to fill jobs now and advance the future STEM workforce.”

In response, MDC reports that it has received 13 million dollars and will implement ARCOS: “Accelerate, Retain, Complete, with Opportunities and Support.” Their press release states: “ARCOS will serve 600 students enrolled in STEM disciplines with the goal of improving retention, progression, and completion rates among Hispanic and other low-income, high-need students.”

The Partnership for a New American Economy and the American Enterprise Institute are raising awareness of the new realities about immigrants and business brought about by technology. Their study also discovered that 40 percent of students attending American STEM programs are foreign-born, and 46 percent of all STEM doctoral candidates. But many are denied immigrant visa status. The report also points to a needed change in direction for immigration policies that will favor STEM graduates who generate so many jobs. Bill Gate’s father also lobbies the American government to encourage research and development at the federal level because there would have been no computer or VR industries without that basic R&D funding. Digital immigrant or digital native, the future has arrived.

Fidel Castro is dead. On the car radio the next day there is an NPR interview with Dr. Padron who remembered a different Miami. As a teen, he worked three jobs and saw signs in businesses and storefronts that read: “No Cubans, No Blacks, and No Dogs.” He hopes we are not witnessing a return to those days of indifference. It’s a week in the life of Miami.