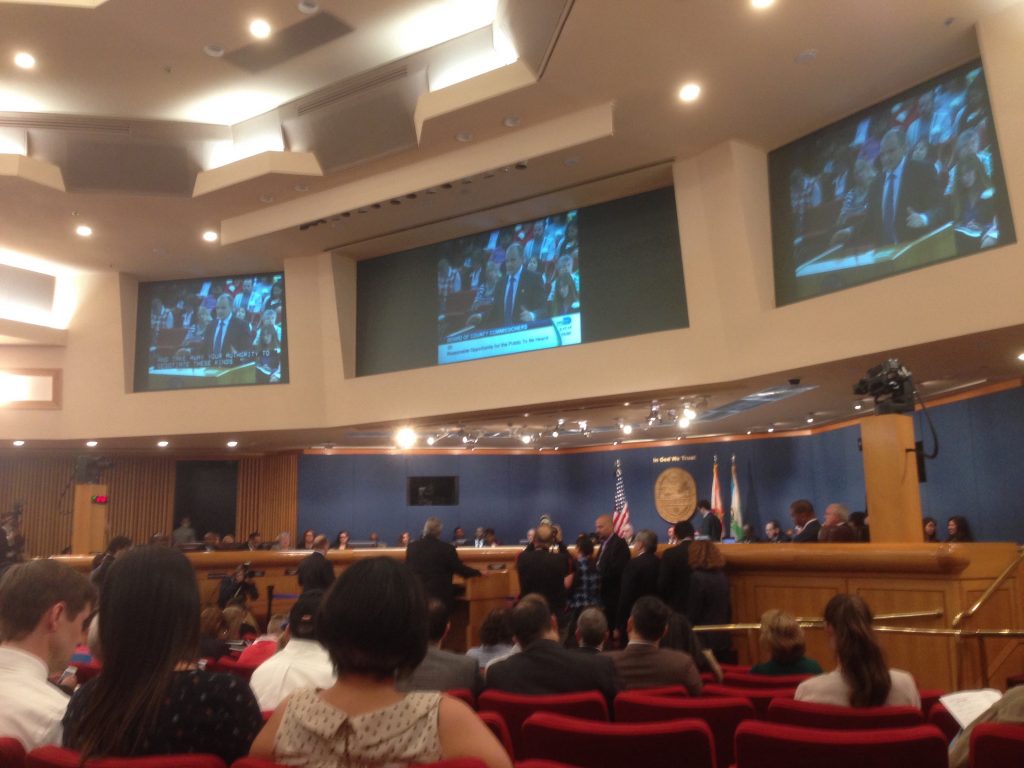 MIAMI Miami-Dade County commissioners rushed through the legislative agenda at a special meeting to a vote on resolutions addressing the county mayor Carlos Gimenez’s response to a declaration emanating from the White House designating Miami-Dade County as a sanctuary city. The acrimonious public hearings and heated deliberations by county commissioners lasted six hours.

This designation requires cities the federal government believes harbor illegal aliens to further detain anyone already in police custody and charged with a crime that they suspect are in violation of U.S. immigration laws. Under the order, if they are persons of interest to federal immigration authorities and based solely on probable cause, they can be held without a warrant.

Charles Fisher of the American Civil Liberties Union said the order itself has been proven to be unconstitutional in several U.S. court jurisdictions as warrantless detentions violate the Fourth Amendment. Currently, local law enforcement officials do not inquire into the immigration status of an individual at the time of the arrest.

Citing the fear of losing federal funding for discretionary projects which could run into hundreds of millions of dollars, the mayor’s memo directs the corrections department to comply immediately with an executive order from President Trump and honor all immigration detainer requests. The federal government is supposed to pay for the cost of these detentions and Gimenez said Miami-Dade County is owed two-million dollars which they have not been reimbursed for.

Gimenez, whose introductory remarks set the tone for the session said, “Miami-Dade has always been in compliance with federal law.” This was confirmed at the meeting by County Attorney Abigail Price-Williams.

Nora Sindigo’s Children Foundation is a prominent national advocate for the U.S. born citizen children of immigrant families whose parents are in the process of being deported. She is also a supporter of the Dream Act which if passed into law would provide a path to legal status for children whose parents are undocumented.

Sindigo thinks that this move will expose tens of thousands of immigrant families to deportations, some of whom are being held on minor violations of the law, adding that when domestic battery cases arise among the undocumented there will be a reluctance to report them.

Sindigo wants a resolution that distinguishes between those convicted of felonies, misdemeanors and domestic disputes.

Maira Rubio is a student attending Miami-Dade College on a scholarship and an example of someone who might have benefited from the Dream Act. She and her entire family are undocumented and have lived in Miami for 25 years. She said, “This is the land of opportunity.”

Holly Cukier’s family lost many of their relatives in the death camps in World War II and she warned of the dangers of not standing up for persecuted minorities. With reference to the mayor’s decision, she said, “I think it is reversible.”

County Commissioner and former Florida State Senator Javier D. Souto testified as to how the county could be considered a sanctuary city existing informally, but not in the law. The commissioners also discussed the need for clarification as to what a sanctuary city is.

A Cuban refugee for example, who entered the country under the federal “wet foot dry foot” law may be in need of access to city services such as food banks or public housing. Souto recalled when Sindigo a refugee from Nicaragua arrived here, Souto said, “I paid her rent.”

After the public testimony, several important questions were addressed by the county commissioners. One commissioner felt that compliance with the order was premature noting that no other city in the U.S. had agreed to comply thus far.

The motion on the resolutions was carried by a vote of 9–3. The major objections voiced by the county commissioners were included as special items, and Commissioner Jean Monestime was a Co-Prime Sponsor on five out of six of the special items.

Commissioner Sally A. Hayman was the Prime Sponsor of the first resolution and led the commissioners to reject the accusation that their county endangers the country and to declare that Miami-Dade is a welcoming and inclusive county. The commission resolved that Miami-Dade County has always been in compliance with federal law and rejected the sanctuary city label.